What to Do in an Active Shooter Situation 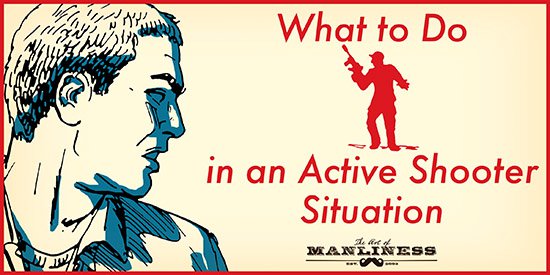 What to Do in an Active Shooter Situation

It’s a sad fact of life in the 21st century that active shootings have become a regular occurrence in the United States. In other parts of the world, terrorist groups are using active shootings to, well, terrorize. While the media focuses on the firestorm of political debate these events cyclically create, I’ve rarely seen them discuss what people are actually supposed to do in these situations.

According to the FBI, active shootings in public places are becoming increasingly common. Which means it would serve everyone to understand how to respond if they ever find themselves in the line of fire.

Over the years I’ve talked to a lot of military, tactical, and law enforcement professionals who’ve spent their careers training and dealing with violent individuals: U.S. marshals, SWAT officers, and special forces operators. And I’ve asked them all this same question: What’s an average joe civilian like me supposed to do when faced with a gunman who’s indiscriminately firing on people?

They’ve all answered the same way.

In today’s article, I share expert-backed advice on how best to react if you ever find yourself in a situation with an active shooter. Learning how to survive a shooting is much like learning how to survive an airplane crash: such an event is statistically unlikely to happen to you, and simple chance may make you a victim before you’re able to take any volitional action. But if there are things you can do to increase your odds of survival even slightly, you ought to know and practice them.